Start a Wiki
Welcome to the Elysium Online Wiki!
This Wiki is made to provide a general understanding and guideline of the game's mechanics. The game "Elysium Online" began early development in late 2018 by Pablo Carpentier. The project is still in it's alpha stages, and is continuously being updated and changed. It first arrived on android and then, later on PC using the publishing site "gamejolt". It recently changed the publishing site to "itch.io" to make it easier for the developer to release a devlog. 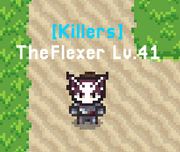 Skins
Placeholder
Items
Add a photo to this gallery

You want to help the wiki ?

Retrieved from "https://elysium-online-official.fandom.com/wiki/Elysium_Online_Wiki?oldid=274"
Community content is available under CC-BY-SA unless otherwise noted.